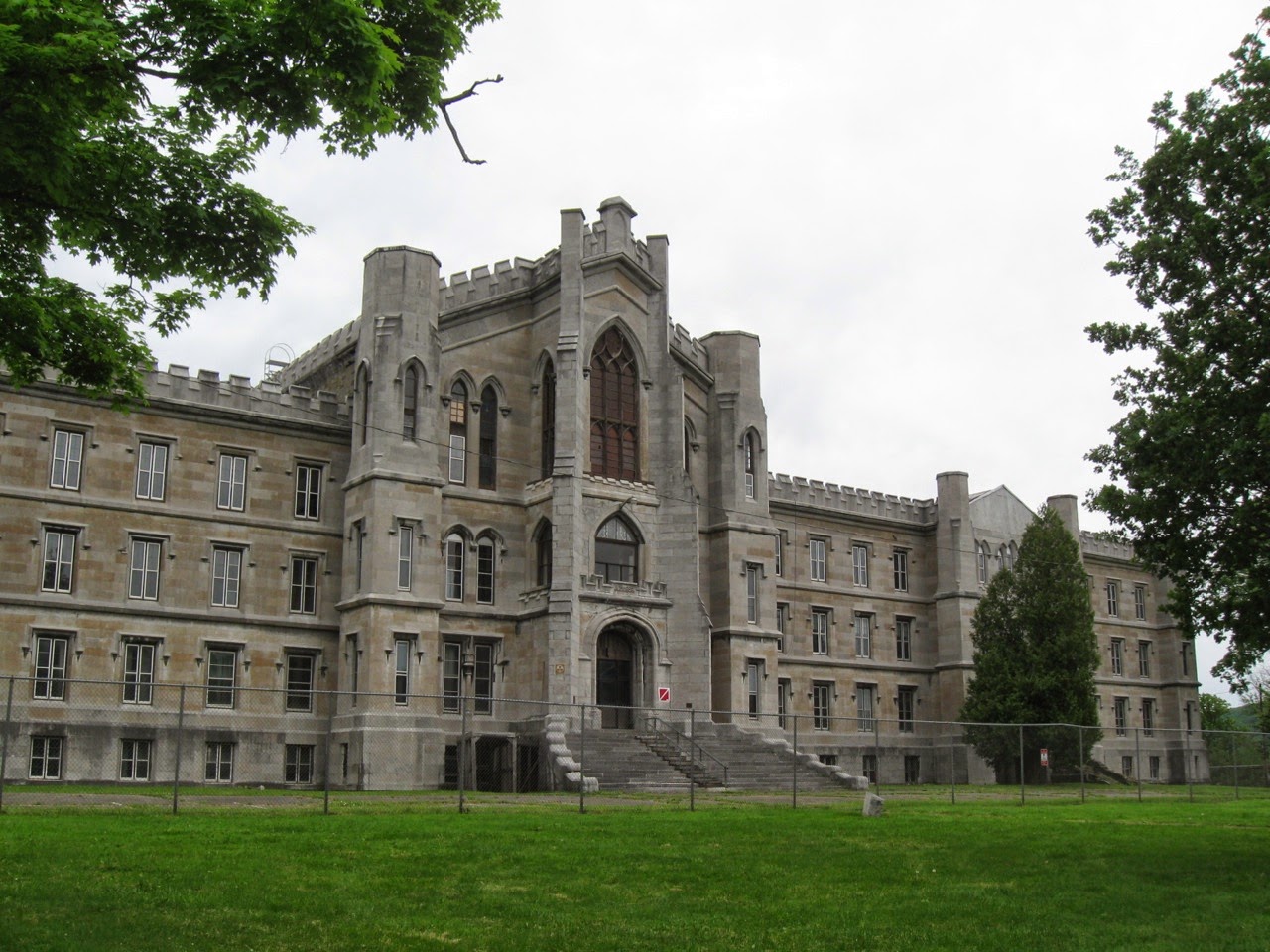 The experience changed my life. Over the course of eleven weeks, I researched and wrote an eighty-page report and decided that I really didn't want to write a dissertation that examined the role of male activists in the British women's suffrage movement. I wanted instead to examine the working lives and work culture of the men and women who staffed the wards of the mammoth, custodially oriented institutions that dominated the provision of mental health care from the mid-19th through the mid-20th centuries -- a topic that brought together the history of labor, medicine, gender relations, and public policy in all manner of interesting ways. At the same time, I also started thinking that, dissertation or not, I would be much happier working in an archives than in an academic institution.


For a variety of reasons, I left graduate school a few years after I became an archivist. However, my interest in the history of mental health care remains very much intact. Since my research focused specifically on New York State, my interest has an architectural dimension: five psychiatric facilities in the United States have been designated National Historic Landmarks, and four of them are located in the Empire State. Whenever I get the chance to visit one of these landmarks, I do so.

Yesterday, I was in the Binghamton, New York area to attend an Appraisal of Electronic Records workshop offered by the Society of American Archivists -- which I highly recommend. After the workshop ended, I headed to the eastern edge of the city of Binghamton to visit the campus of what is now the Greater Binghamton Health Center to photograph the structure that housed the New York State Inebriate Asylum, the first facility in the United States that treated alcoholism as a disease. 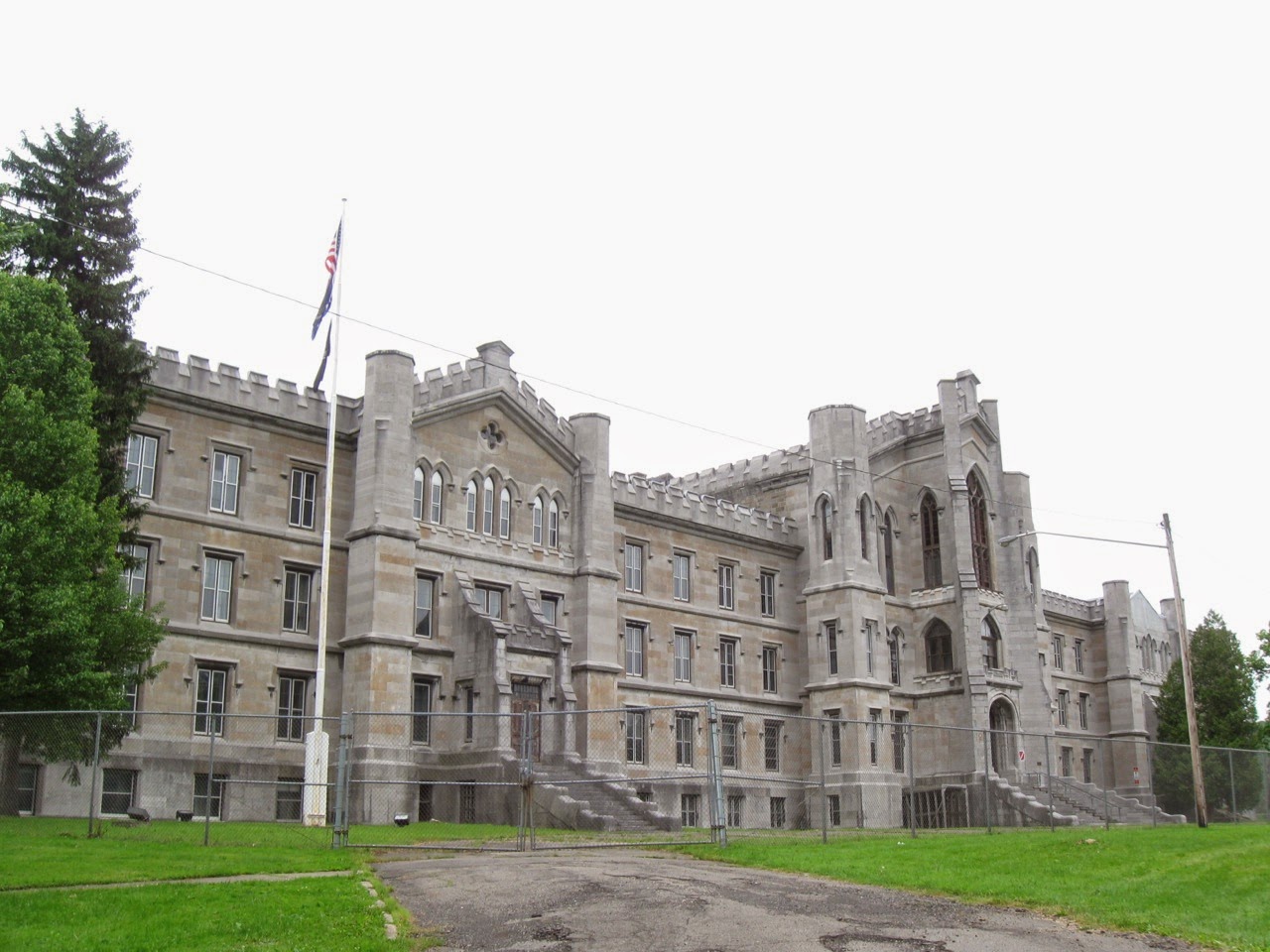 The asylum, which was built between 1857-1866, was designed by Issac G. Perry, who ultimately became the lead architect of the New York State Capitol. Even though the crennellated turrets that once graced its roof were removed in 1954 in a desperate attempt to stop persistent roof leaks, it remains a Gothic Revival masterpiece . . . .

The inebriate asylum's treatment methods were unsuccessful, and in 1879 Governor Lucious Robinson asserted that the state's approach to the treatment of alcoholism was a failure. The inebriate asylum became the Binghamton Asylum for the Chronic Insane -- a custodial facility meant to house people who did not respond to the therapeutically-oriented care offered at the state's facility in Utica. Given that Issac Perry, who oversaw the retrofitting of the facility, had based his original design for the inebriate asylum upon the "Kirkbride model" of insane asylum construction, which emphasized the role of formally symmetrical architecture in restoring order to disordered minds, I suspect that the transition from "inebriate asylum" to "insane asylum" was a rather easy one. 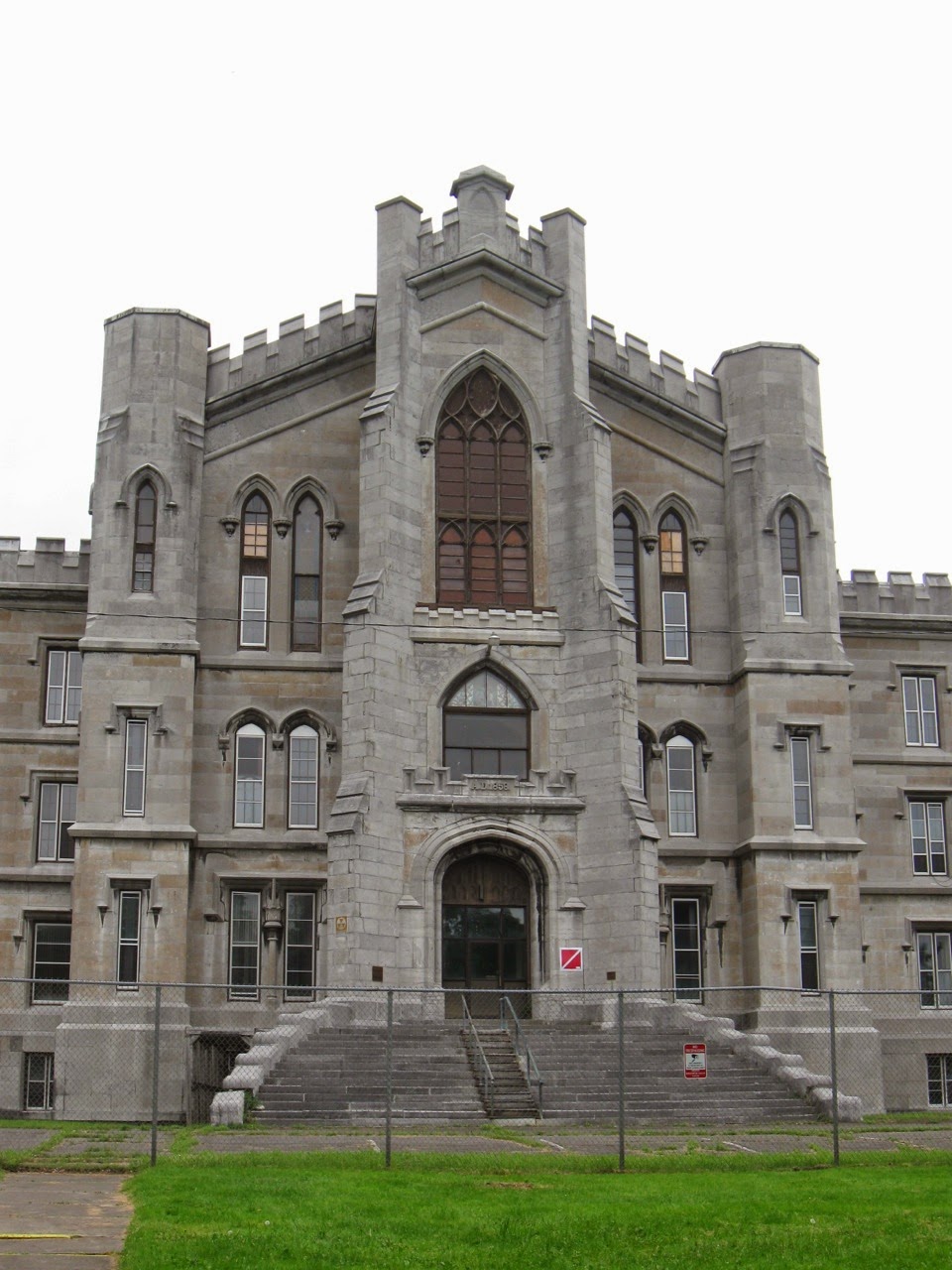 The Binghamton Asylum for the Chronic Insane became the Binghamton State Hospital in 1890 and the Binghamton Psychiatric Center in 1977. In the final third of the 20th century, the state constructed a modern facility immediately to the west of the old Inebriate Asylum building, and only a few administrative offices remained within the older building's central transept. 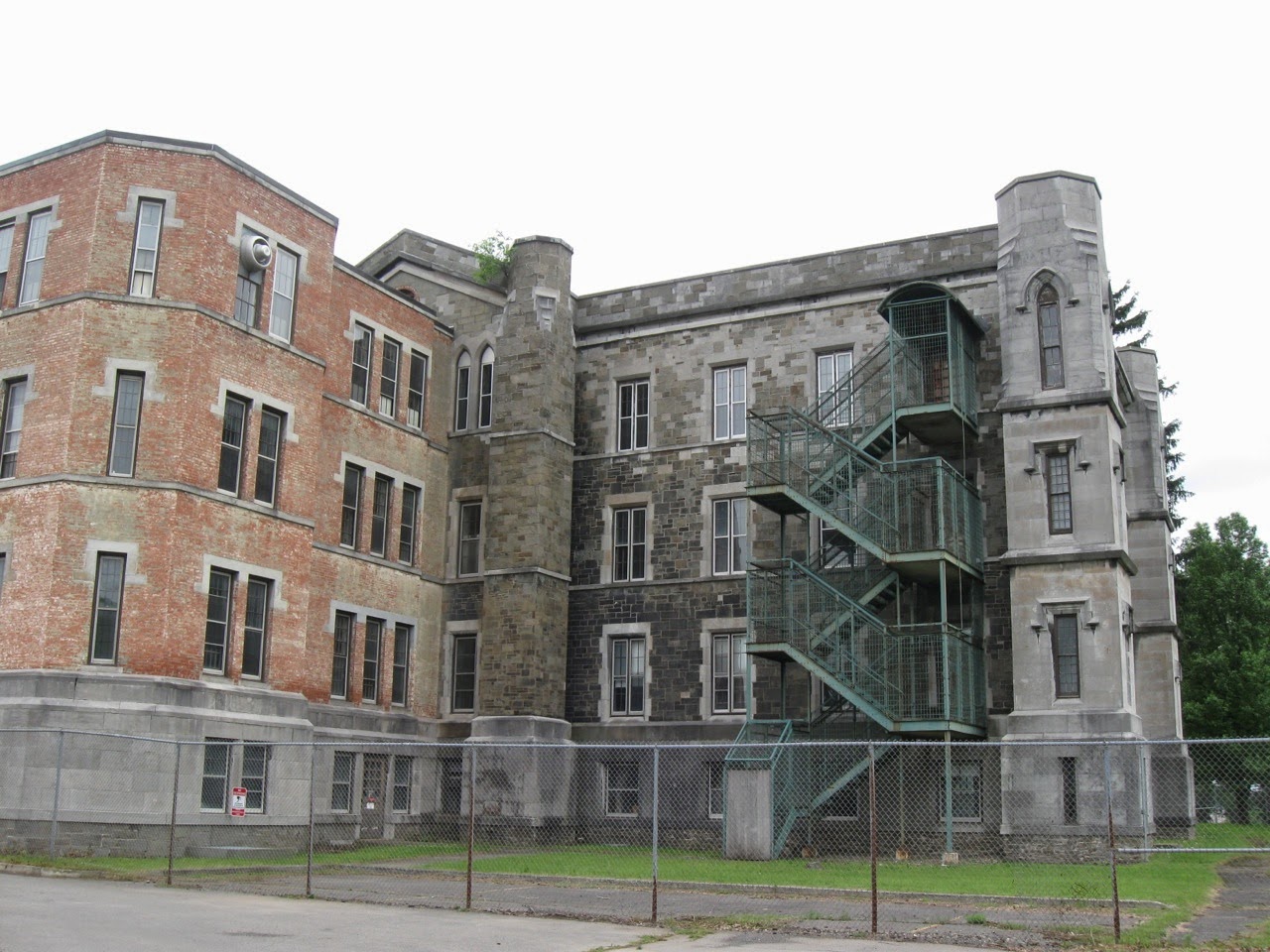 For much of its history, the Inebriate Asylum building was actually t-shaped. The main building survives, but the "service" wing that housed kitchens, laundries, and other essential facilities was torn down at some point in the late 20th century; a parking lot now occupies the space where this wing once stood. However, two small brick structures, one attached to each wing of the main building, have survived. I'm not certain what these structures were used for, but I suspect that they housed activity rooms. As you can see, the materials used to construct the rear facade of the main building were not as fine as those used on its front: monochromatic Syracuse limestone covers the front facade, which for decades was readily visible from downtown Binghamton, but locally quarried stone was used for the rear facade. (Note also the wholly enclosed fire escape.) 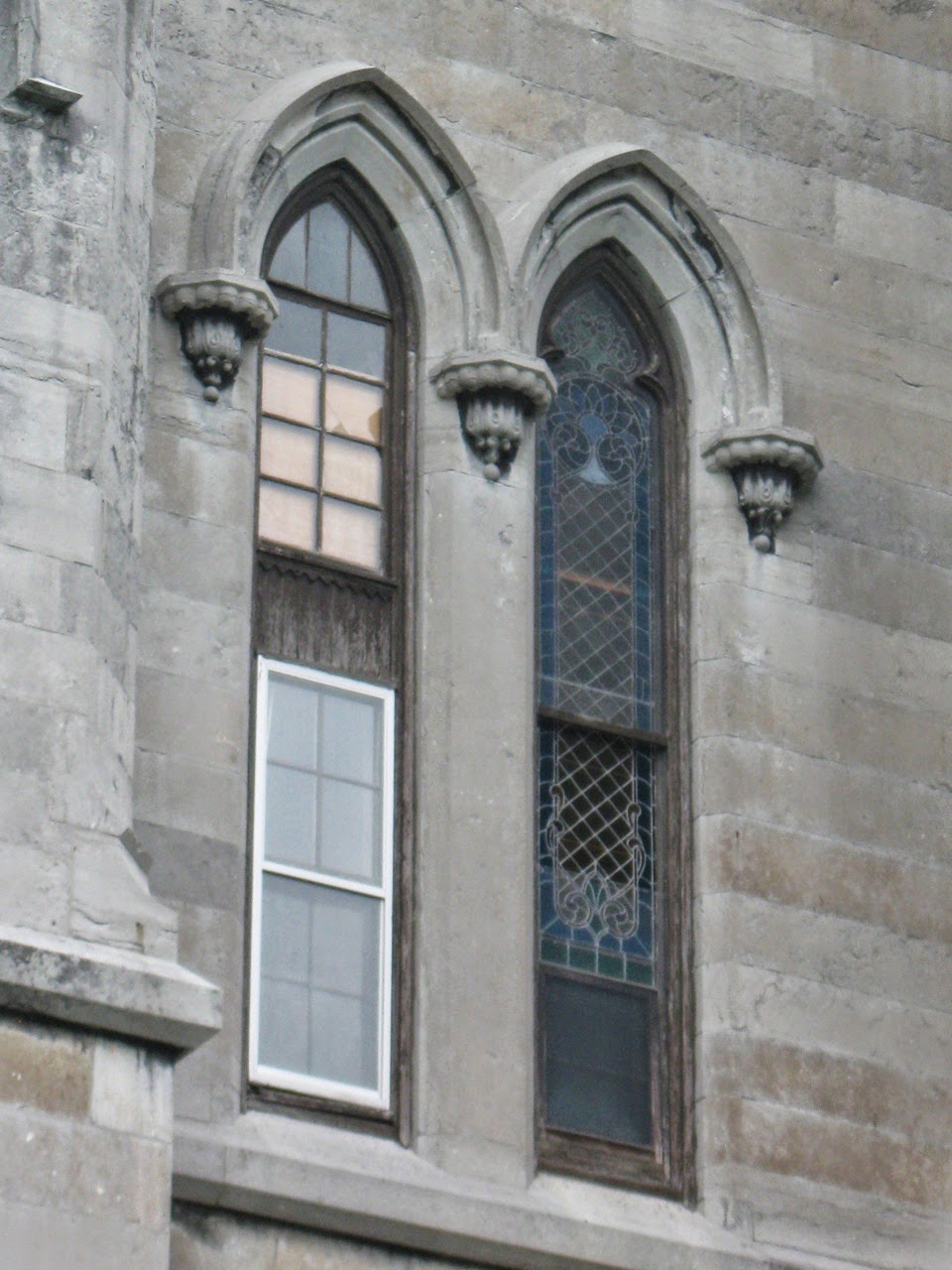 Even today, traces of the building's former grandeur remain. For example, a stained glass window still graces the chapel that formerly occupied the third floor of the central transept. A.D. Wheeler, who received permission to enter the structure and photograph its interior, discovered that some of its intricately detailed woodwork, light fixtures, and stained glass has survived. 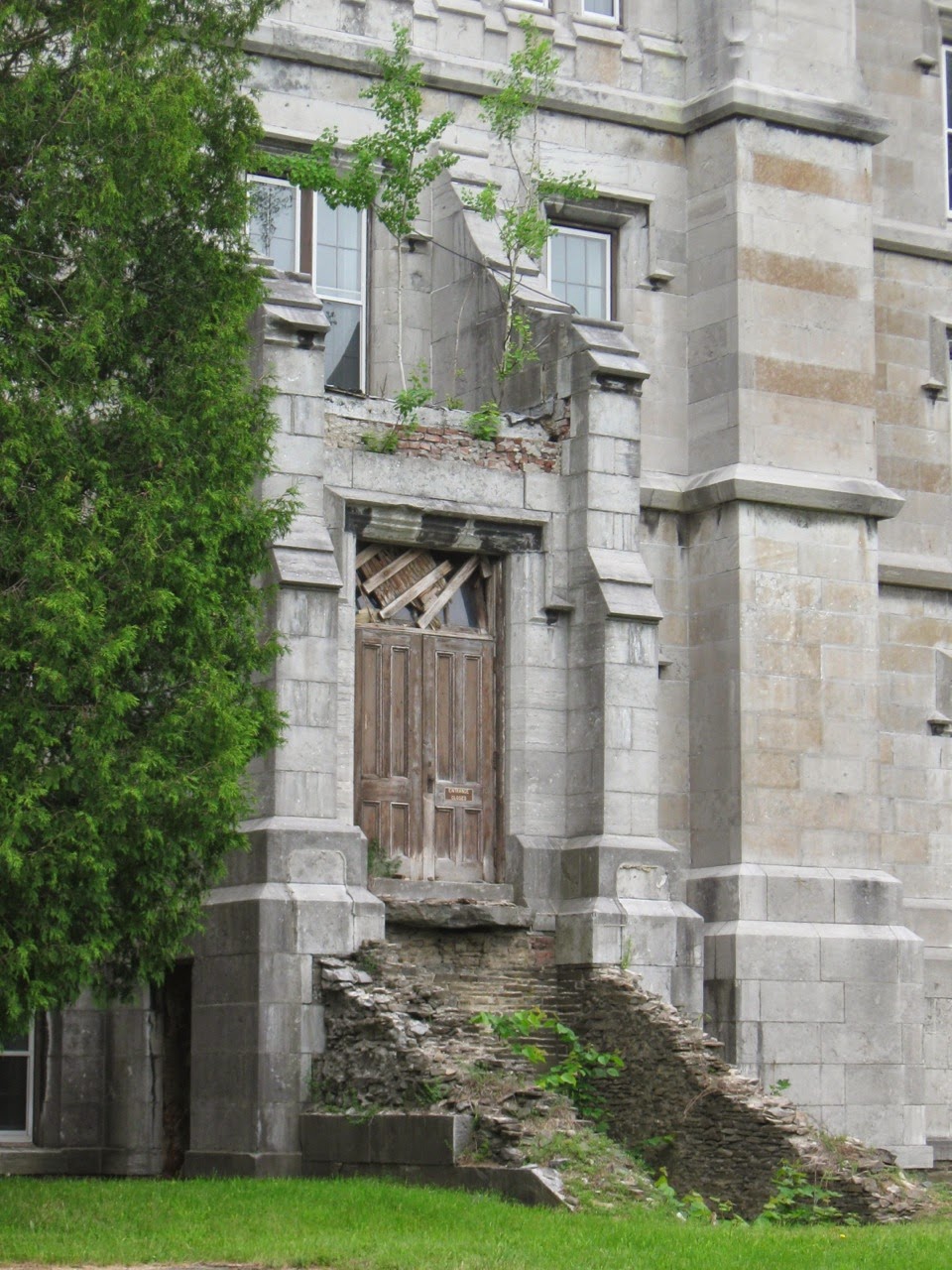 Wheeler's work also documents the building's interior decay, but one need not go inside in order to see that this structure is in peril. In 1993, a section of the parapet above the front entrance to the south transept collapsed. The few remaining offices within the structure were hastily relocated, and the building has been completely vacant ever since. The state stabilized the facade with concrete and removed the south transept stairs for safekeeping, but it's plain that even the repairs are starting to crumble. 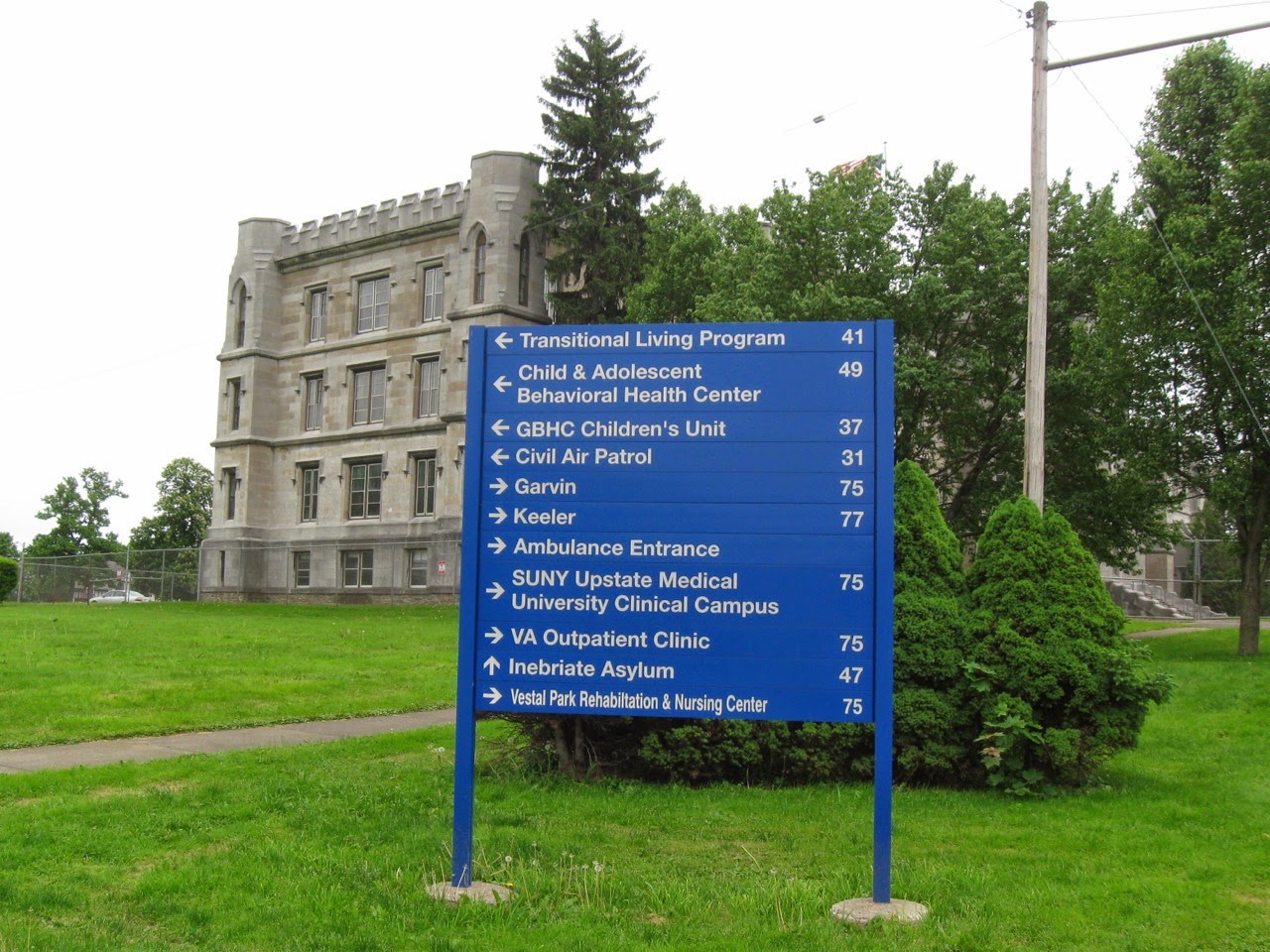 The Inebriate Asylum building was designated a National Historic Landmark in 1997, a fact that is reflected in signs that dot the Greater Binghamton Health Center campus. However, in the late 1990s the State of New York attempted to sell the property on which the building stands -- without making any reference to the fact that a landmarked building stood on it. In 1999, the National Trust for Historic Preservation responded to the state's move by placing the Inebriate Asylum building (and psychiatric facilities in Buffalo, Poughkeepsie, and Utica) on its annual list of the nation's most endangered historic sites.

The State of New York still owns this building and the land on which it stands. Binghamton has fallen on hard times, and there's no shortage of available property in the area. A couple of years ago, it even seemed that the building would be given new life: a determined area legislator and the president of the SUNY Upstate Medical University, which is based in Syracuse but was looking to expand in Binghamton, announced that the Inebriate Asylum building would be completely renovated and turned into a medical education center. Unfortunately, scandal led the president of SUNY Upstate to tender his resignation last November, and its seems that SUNY Upstate's plans for the Inebriate Asylum building have been put on hold. In the meantime, the building quietly continues decaying.
Posted by l'Archivista at 2:01 AM 2 comments: