An afternoon at Historic Cherry Hill

Historic Cherry Hill is one of Albany's gems. It sits at the southern edge of my neighborhood, the "beautiful and historic South End," and it's all too often overlooked . . . despite sitting almost directly opposite an interstate off-ramp.  Given its rich history and its mind-boggling collections of historic objects and historical records, this neglect is shameful.

Those of you who live in New York's Capital District know that the Historic Cherry Hill Association has just averted disaster: last week, the Albany Times-Union reported that if it could not raise $152,000 before July 31, it would be forced to forfeit $736,000 in state and federal grant funding and might be compelled to cease operations altogether.  Fortunately, the story prompted an outpouring of support, and the Historic Cherry Hill Association is out of the red -- at least for now.  As glad as I am not to have to write a desperate plea for immediate donations, I must emphasize that the Historic Cherry Hill Association, which has a phenomenally talented and dedicated (they voluntarily took a 20 percent pay cut!) staff, still needs your help. Please consider donating to this fine institution and helping to ensure that it attains long-term fiscal stability. 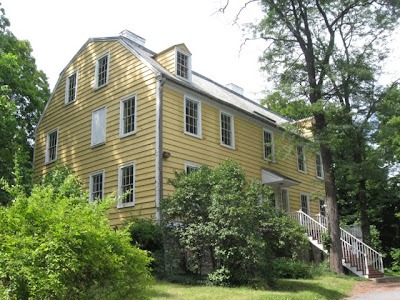 Cherry Hill was built in 1787 by Colonel Philip Kiliaen van Rensselaer, a scion of one of New York's oldest and wealthiest Dutch families, for his new bride, Maria Sanders, who was the granddaughter of colonial governor Peter Schuyler.  Van Rensselaer's forebears were all Dutch, but Sanders's father was the well-to-do descendant of Scots who came to Albany after the English took control of what was formerly New Netherland.  The house itself bears evidence of the melding of the region's Dutch and English colonial elites: its body is Georgian, but its gambrel roof is thoroughly Dutch.

The house was occupied by Van Rensselaer descendants until 1963, when it became a house museum. And what a house museum!  All five generations of the family were collectors, and they kept everything: the 16th-century Dutch furniture their forebears brought to New Netherland, the silver they purchased before the American Revolution, the vast collection of Chinese antiques assembled by a family member who did missionary work in the 19th century, the magazines and tins of tooth powder they bought in the 1920s, the Tupperware they used in the 1960s, and tons -- literally -- of other stuff. They also kept a vast number of letters, diaries, detailed records of their furniture and other purchases, and a wide array of other family papers. As a result, Historic Cherry Hill's collections are an invaluable resource for anyone studying the colonial and early republican era, the evolution of American material culture, or the rise and fall of America's colonial elite. 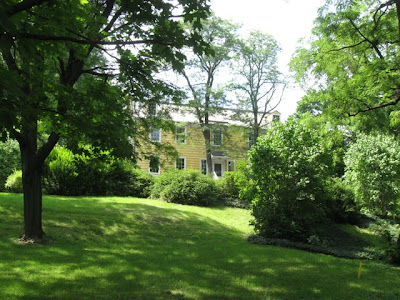 Cherry Hill was originally the centerpiece of a vast working farm. By 1790, the farm occupied over 1,000 acres of land and was home to a brewery and a tannery.  However, financial pressures forced Philip van Rensselaer's descendants to sell off many parcels of farmland in the 1880s and the lowlands adjoining the Hudson River were filled in and in 1925 became the site of the mammoth Port of Albany facility.  The streets surrounding the mansion are now occupied by industrial facilities and 19th-century working-class homes, and the filled-in riverfront features not only the port but also a rail line and a six-lane interstate loathed by my landlord and almost everyone else who lives in the South End, myself included.  However, the house is built on a hillside looking over South Pearl Street, the centuries-old road that connects the South End to Albany's downtown.  When viewed from South Pearl Street, the house's pastoral past remains quite apparent -- despite the constant hum of interstate traffic in the background.

At present, the house is undergoing extensive reconstruction: the family's incessant amassing of furniture and other heavy objects ultimately compromised the house's foundation, and the bulk of the objects in the museum's collections had to be moved to a purpose-built collections storage facility.  Once the reconstruction is complete, some of the collections will be moved back into the house and it will look as it did when the last Van Rensselaer descendant, Emily Putnam Rankin, lived there; Rankin was extremely proud of her family's heritage and made extensive use of its 18th-century furniture decorative object collections. 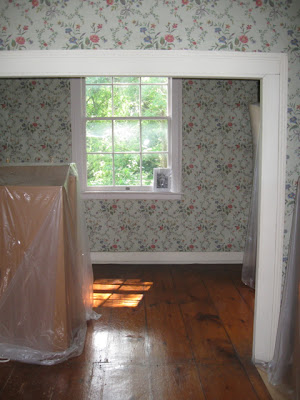 The Historic Cherry Hill Association is currently giving tours of the house that focus on the reconstruction, and the experience is both fascinating and, owing to the presence of visible water and structural damage in several rooms, a bit discomfiting at times.  However, progress is being made and -- thanks to the recent fund-raising effort -- even more progress will soon be made, and you can tell that this house is going to be a masterwork once it's restored.  Just look at those 18th-century floorboards. They don't make 'em like that anymore.

(Incidentally, the second-floor bedroom pictured above was the site of one of Albany's most notorious crimes.  In 1827, John Whipple, a successful businessman who had married into the Van Rensselaer family and was living at Cherry Hill, was murdered in this room. His wife, Elsie Lansing Whipple, was having an affair with Jesse Strang, a drifter who was employed as a servant at Cherry Hill, and the two of them plotted to kill her husband. After a poisoning attempt went awry, Strang shot Whipple in this bedroom. After a trial that fell far short of current standards of fairness -- the district attorney was related to the van Rensselaers and the Lansings -- Strang was convicted of murder and became the last person who was hanged publicly in Albany.  Elsie Lansing Whipple was tried as an accomplice and found not guilty -- in large part, many people throughout the city and the nation believed, because the city's elite could not believe that a woman who moved within their own social circles could do such appalling things.) 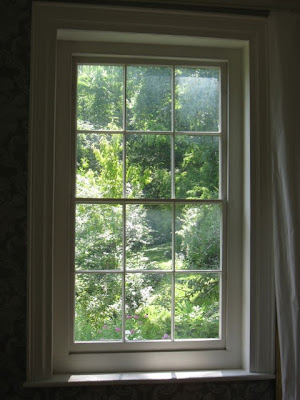 The windows have already been repaired or, when needed, replaced, and many of them offer pleasing views of the surrounding grounds. This view from one of the front rooms on the first floor is one of my favorites. 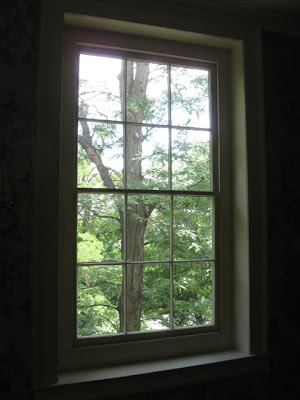 One of the windows in the second-floor guest bedroom overlooks a tree that, like the house, has seen some hard times yet carries on gracefully.  Standing in this room, you would never guess that an interstate highway is approximately five hundred feet away. 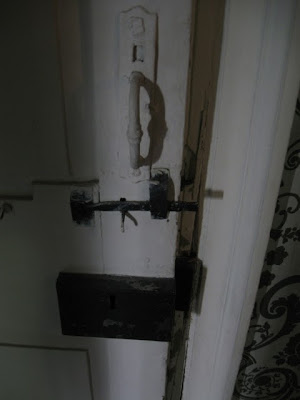 Even though most of the object collections have been moved out of the house for the time being, the Van Rensselaer family's habits are still evident: in some (but by no means all) instances, older objects were augmented and supplemented but not replaced. 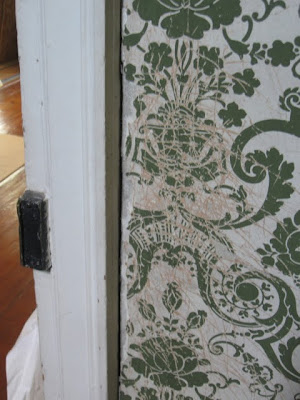 As noted above, Cherry Hill will ultimately look as it did when Emily Rankin lived in the house.  Rankin's diaries detail how her dog repeatedly scratched the wallpaper in one of the first-floor rooms, and as a result this section of paper will remain in place; all of the other wallpaper in all of the other rooms will be replaced with historically accurate reproductions. 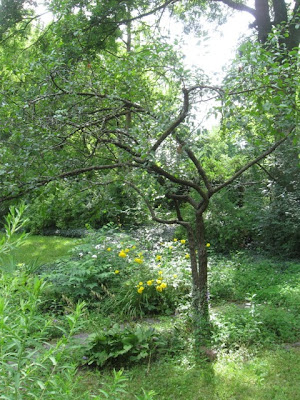 One of Cherry Hill's volunteers is a dedicated gardener.  Thanks to her efforts, the landscaping around the house looks fantastic. This charming small garden sits just outside the dining room. 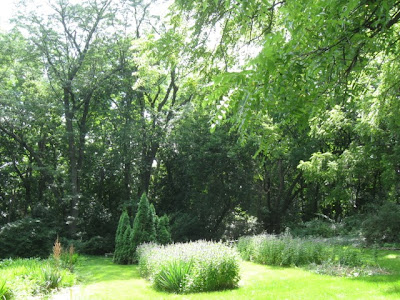 I also like the large garden southwest of the house. It looks understated and uncontrived, which means that no small amount of planning went into it.

If you ever get the chance to visit New York's fair capital city, I hope that Historic Cherry Hill will earn a spot on your itinerary.  And if you live around here but haven't visited it yet, what on earth are you waiting for?
Posted by l'Archivista at 8:23 PM 1 comment: