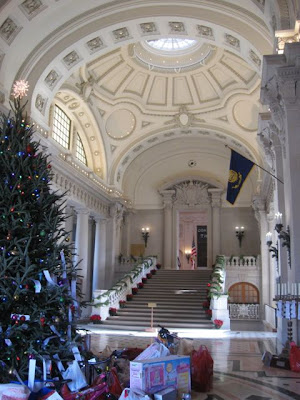 The 2012 Best Practices Exchange (BPE) ended late yesterday morning, and my colleague Michael and I did some sightseeing in Annapolis before making the long drive back to Albany.  I'm sleep-deprived and still processing everything I learned, so this post is going to highlight some of the insights that Martha Anderson, the Director of Program Management at the Library of Congress's National Digital Information Infrastructure Preservation Program, shared during yesterday's plenary presentation:
Image:  Rotunda of Bancroft Hall, the mammoth Beaux-Arts dormitory in which all midshipmen reside, United States Naval Academy, Annapolis, Maryland, 6 December 2012.  The gifts under the tree are for the Toys for Tots program overseen by the United States Marine Corps Reserve.
Posted by l'Archivista at 11:46 PM No comments: 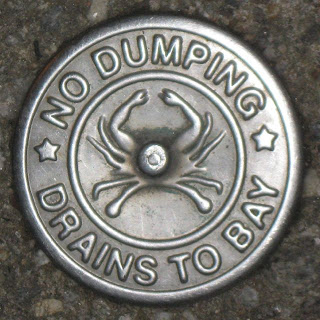 Yesterday was the second day of the 2012 Best Practices Exchange, and the sessions I attended were delightfully heavy on discussion and information sharing. I had some problems accessing the hotel's wifi last night and the BPE is still going on, so I'm going to post a few of yesterday's highlights before turning my attention back to this morning's discussion:
Image:  storm drain marker on Randall Street at City Dock, Annapolis, Maryland, 3 December 2012.
Posted by l'Archivista at 9:53 AM No comments: 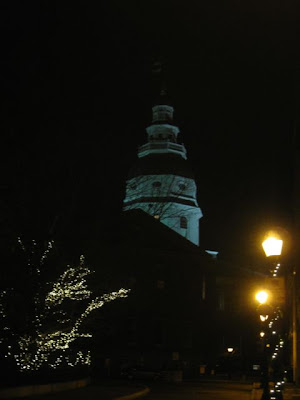 Today was the first day of the 2012 Best Practices Exchange (BPE), an annual event that brings together archivists, librarians, IT professionals, and other people interested in preserving born-digital state government information. The BPE is my favorite professional event, in no part because it encourages presenters to discuss not only their successes but also the ways in which unexpected developments led them to change direction, the obstacles that proved insurmountable, and the lessons they learned along the way.

As I explained last year, those of us who blog and tweet about the BPE are obliged to use a little tact and discretion when making information about the BPE available online. Moreover, in some instances, what's said is more important than who said it. As a result, I'm going to refrain from tying some of the information that appears in this and subsequent posts re: the BPE to specific attendees.

I'm also going to keep this post short. Our opening discussion began at 8:30, the last session ended at 4:45, and I was in a Persistent Digital Archives and Library System (PeDALS) meeting until almost 6:00. The PeDALS crew then hit the streets of Annapolis, Maryland. We started off with ice cream at the Annapolis Ice Cream Company (yum!), and then three of us split off from the group, rested a bit and caught up on the day's e-mail, and had dinner at the Ram's Head Tavern (also yum!) The BPE resumes tomorrow at 8:30, and I'm presenting at the end of the day, so I'm going to highlight the most interesting tidbits of information that I picked up today and then head to bed.

Doug Robinson, executive director of the National Association of Chief Information Officers (NASCIO) was this morning's plenary speaker, and he made a couple of really interesting points:
I had the privilege of moderating one of the afternoon sessions, "Tearing Down the Borders: Coast-to-Coast Archives; Record-Keeping in the Cloud," in which Oregon State Archivist Mary Beth Herkert discussed her state's development of a cloud-based electronic records management system for state agencies and local governments, Bryan Smith of the Washington State Digital Archives detailed some of the Digital Archives' recent technical innovations. They then discussed their joint, National Historical Publications and Records Commission-funded effort to explore expanding Oregon's records management system to Washington State and ingesting Oregon's archival electronic records into Washington's Digital Archives.

I was really struck by Mary Beth's explanation of the cost savings Oregon achieved by moving to the cloud. In 2007, the Oregon State Archives was able to develop an HP Trim-based electronic records management system for its parent agency, the Office of Secretary of State. It wanted to expand this system, which it maintained in-house, to all state agencies and local governments, but it couldn't find a way to push the cost of doing so below $100 per user per month. However, the State Archives found a data center vendor in a small Oregon town that would host the system at a cost of $37 per user per month. When the total number of users reaches 20,000 users, the cost will drop to $10 per user per month.

Bryan made a couple of really intriguing points about the challenges of serving as a preservation repository for records created by multiple states.  First, partners who don't maintain technical infrastructure don't always realize that problems may be lurking within their digital content.  Washington recently led a National Digital Information Infrastructure Preservation Program (NDIIPP) grant project that explored whether its Digital Archives infrastructure could support creation of regional digital repository, and the problems that Digital Archives staff encountered when attempting to ingest data submitted by partner states led to the creation of tools that enable partners to verify the integrity of their data and address any hidden problems lurking within their files and accompanying metadata prior to ingest.

Second, the NDIIPP project and the current Washington-Oregon project really underscored the importance of developing common metadata standards. The records created in one state may differ in important ways from similar records created in another state, but describing records similarly lowers system complexity and increases general accessibility. Encoding metadata in XML makes it easier to massage metadata as needed and gives creators the option of supplying more than the required minimum of elements.

I'm going to wrap up this post by sharing a couple of unattributed tidbits:
Image:  Maryland State House, Annapolis, Maryland, 4 December 2012.  The State House, which was completed in 1779, is the first state capitol building completed after the American Revolution, the oldest state capitol that has been in continuous legislative use and the only state house that has an all-wooden dome.

Posted by l'Archivista at 11:57 PM No comments: