Whatever you're doing, I hope you're having a lovely time doing it and that 2011 brings nothing but good things to you.
And what am I doing on New Year's Eve? I'm going to spend a quiet evening at home watching DVDs and doing the prep work needed to make hoppin' John tomorrow. I flew into Albany in the midst of the snowstorm on Sunday night, went back to work on Monday morning, worked furiously all week, and really feel the need for a little quiet time.
New York State is one of the twenty-six states experiencing a gubernatorial transition in the wake of November's elections, and in New York governor's take office on New Year's Day. Most governors have opted to take a private oath of office at midnight and a public oath of office at noon.* However, Governor-Elect Andrew M. Cuomo will take the private oath of office at around 10:30 this evening so that his children and other young guests at tonight's Executive Mansion dinner will be able to witness it. He won't be the first New York governor to do so. 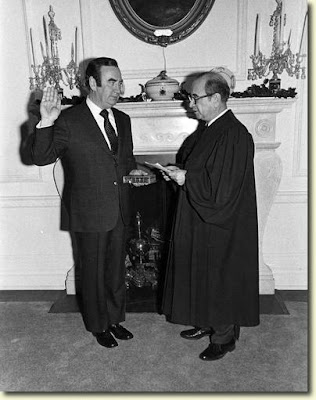 Charles D. Breitel, Chief Justice of the New York State Court of Appeals, issues the oath of office to Governor Hugh L. Carey, 31 December 2010, 10:30 PM. Carey, a widower, took the oath at 10:30 so that his twelve children could witness the ceremony before bedtime. New York (State). Governor. Public information photographs, 1910-1992. Series 13703-82, Box 3, No. 8152_012. Image courtesy of the New York State Archives.
*Actually, both oaths are less-than-essential: the official mechanism for taking office is the signing of a notarized document that will be kept on file by the New York State Secretary of State. Governor-Elect Cuomo probably signed such a document, which will go into effect at the stroke of midnight, earlier today.
Posted by l'Archivista at 7:19 PM No comments: 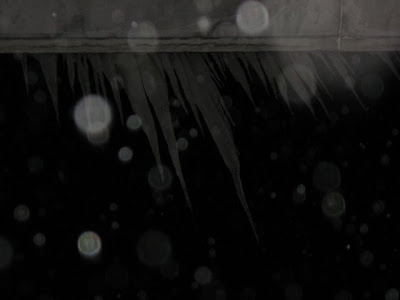 Icicles and blowing snow at the Cultural Education Center, which houses the State Archives, State Library, and State Museum, Albany, New York, 27 December 2010, 5:43 PM.
Just in case you missed them in the holiday whirlwind, here are some recent news stories relating to American state archives and state archivists:
Posted by l'Archivista at 9:48 PM No comments:

Here's a not-surprising-but-nonetheless-mind-boggling snippet of news: the U.S. National Archives and Records Administration (NARA) reports that it has received approximately 80 terabytes of electronic records generated by President George W. Bush and his staff. As if this weren't astounding enough, consider these other facts:
Is your head spinning yet? If not, just start contemplating the volume of electronic records that NARA will likely receive from the Obama administration.
The Bush administration records, which have been ingested into NARA's Electronic Records Archives (ERA) system, won't be fully processed for quite some time, but archivists are busy preparing for an anticipated deluge of researcher requests in January 2014, when some of the records will become accessible under the provisions of the federal Freedom of Information Act.

By the way, NARA and the federal Office of Management and Budget are halting further development of the ERA system earlier than planned. NARA will focus instead on getting federal agencies to use ERA and may "recompete" the operation and maintenance components of its contract with Lockheed Martin, which built the system. Interesting.
Posted by l'Archivista at 10:49 PM No comments:

Apologies in advance for the bittersweet nature of this post.

An old friend of mine died in 2005. We had lost touch as our lives diverged -- different colleges, different graduate schools, different career choices -- but I always thought kindly of him and always suspected that somehow, someday, our paths would cross again. I learned that he had died some time after the fact, but I was deeply saddened by it. How could this kind, brilliant, exasperating, endearing man vanish from this earth at 35? He had already done some amazing things -- as an undergrad, he had registered thousands of voters, worked on several successful political campaigns, and been a viable city council candidate – and he was destined to do more amazing things. Why didn’t he get the chance to do them, and why didn’t he get the chance to grow old with the people who loved him?

Of course, life moves on, and after a time thoughts of my friend became more and more sporadic. However, a few nights ago, I was looking over old friends’ Facebook profiles, trying to find out whether any of them were also going back to Ohio for the holidays. All of a sudden, it struck me that the Internet Archive might have captured my deceased friend’s blog, which vanished from the live Web before I found out about his death. I did a little detective work, uncovered the blog’s URL, and, sure enough, discovered that the Internet Archive had captured it.

The Internet Archive’s copies omit some posts, many of the photographs, and all of the reader comments, but most of the blog’s contents are there. I spent several hours reading my friend’s posts and quickly discovered that he was still, in many respects, the person I knew: outrageously funny, keenly observant, kind one moment and cutting the next, and interested in and knowledgeable about technology, politics, and fashion.

However, there were also a few surprises. Given his political activism and acumen, I always half-expected that one day I would turn on the TV and see him in a sharp suit and tie, cogently speaking on behalf of one of the big Democratic Party organizations or gay rights lobbying groups. He was living in Washington, D.C., but hadn’t yet found his professional niche: he had gone to law school for a while, but as of 2005 he was bouncing between a number of short- and long-term IT jobs. He was also single -- a real surprise given his capacity for devotion, his intellect, and his looks. However, he really seemed to be enjoying life. He liked working in IT, he loved his cats (and devoted a lot of effort to concealing their presence in a no-pets-allowed apartment building), his interests were wide-ranging, and he had found good friends in D.C.

In a way, reading my friend’s blog was like getting the chance to have one last long talk with him. Even though doing so was in some respects painful -- all of the sorrow I felt when I first learned of his death came flooding back -- I’m immensely grateful that I got to spend a little more time with him, at least in spirit.

Any archivist or historian knows that humans keep historical records in part because records enable the living to connect -- intellectually and emotionally if not physically -- with the dead. A growing number of archivists are also aware of the need to preserve at least some digital personal materials and to provide advice and guidance to individuals and families seeking to preserve their own digital materials and the challenges associated with preserving personal and family digital materials posted on social media sites or stored by commercial entities. I’ve written about these issues before, but reading my friend’s blog has made these issues real and urgent in a way they weren’t before -- and has deepened my already profound appreciation for the Internet Archive. Thanks, Internet Archive, for ensuring that my friend’s words live on and for enabling me -- and others -- to spend just a little more time with him.
Posted by l'Archivista at 4:16 PM 1 comment: 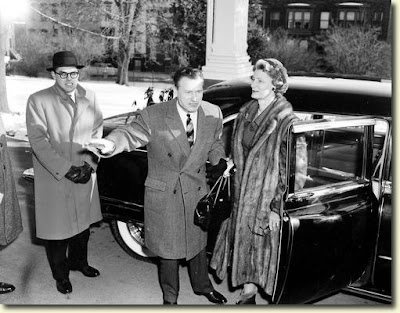 Governor-Elect Nelson A. Rockefeller and Margaretta "Happy" Rockefeller arrive at the Executive Mansion for a luncheon with Governor W. Averill Harriman and First Lady Marie Harriman, 10 December 1958. New York (State). Governor, Public Information Photographs, 1910-1992, accretion 13703-83. Image courtesy of the New York State Archives.
. . . at least on this blog. Posting will likely a little light during the next few weeks: New York State will undergo a gubernatorial transition on January 1, 2011, and I'm going to be busy overseeing a comprehensive Web crawl and helping with transition-related transfers of records from multiple offices and agencies. I'll pop in whenever I can, but things will likely be pretty quiet around here until January. Have a nice December.
Posted by l'Archivista at 8:21 PM No comments:

Earlier today, Rolling Stone posted an article (which also appears in the December 23, 2010-January 11, 2011 edition of the print magazine) highlighting the problems associated with the music industry's move to digital master recordings. Much to their shock and dismay, record labels have repeatedly discovered that the masters of many relatively recent recordings have been wholly or partially lost.
This problem has not only cultural but also commercial ramifications: "'If people can't figure out why a song isn't on Guitar Hero, there's a good chance it's because there's no way to revive the digital master file,' says one industry source." Deluxe reissues, soundtrack and video licensing, and other forms of reuse and repurposing -- all of which account for a substantial percentage of record label profits -- are all dependent upon the existence of multitrack masters; the files on CD's and backup tapes simply won't suffice.
The article is better at describing the problem than outlining the possible solutions, but it's a thought-provoking piece nonetheless. It also cites a recent Council on Library and Information Resources-Library of Congress report focusing on the challenges of preserving analog and, in particular, digital audio recordings -- which is essential reading for archivists working with audio materials and of interest and use to archivists and librarians working with other types of digital materials.
. . . And if reading about these problems makes you start thinking about the fate of your own digital music files, Rolling Stone has also posted five helpful preservation tips. I'm not wild about tip no. 2 -- "audiophile-quality files" can be a preservation nightmare if encoded in proprietary formats -- or tip no. 5 -- I suspect that at least a few cloud-based file hosting services will bite the dust with little warning -- but the other three tips are superb. Tip no. 1, "Back it up, stupid," is particularly important. Put copies of your music files (and your other important files) on a portable hard drive, and then store that hard drive well away from your computer so that the chances of losing both copies to fire, burst pipes, etc., is minimized; better yet, keep the portable drive at your office, a relative or friend's house (you can keep his or her backup drive in exchange), or in a safe deposit box.
Posted by l'Archivista at 10:38 PM No comments: