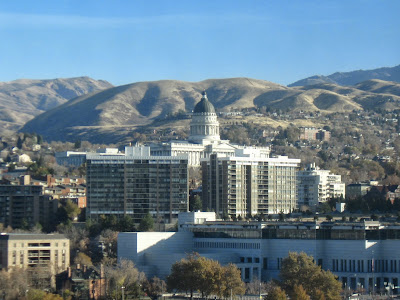 The 2013 Best Practices Exchange (BPE) ended last Friday, and I wrote this entry as I was flying from Salt Lake City to Ohio, where I spent a few days tending to some family matters. I've been back in Albany for about 46 hours, but I haven't had the presence of mind needed to move this post off my iPad until just now.

I'm leaving this BPE as I've left past BPE's: excited about the prospect of getting back to work yet so tired that I feel as if I'm surrounded by some sort of distortion field.

The last BPE session featured presentations given by Jason Pierson of FamilySearch and Joshua Harman of Ancestry.com, and I just want to pass along a few interesting tidbits and observations:
Image: the Utah State Capitol, as seen from the 12th floor of the Radisson Salt Lake City Downtown, 14 November 2013.
Posted by l'Archivista at 10:34 PM No comments: 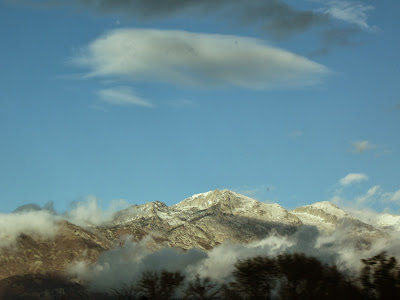 I wasn't feeling particularly well yesterday, and when I walked into the closing discussion of the 2013 Best Practices Exchange (BPE), I found myself thinking I would have a really hard time explaining to my colleagues what I learned at this year's BPE; I loved every session I attended, but I didn't believe that I could pull together any coherent thoughts about them. Fortunately, Patricia Smith-Mansfield (State Archivist of Utah) and Ray Matthews (Utah State Library) were fantastic discussion moderators, and the questions they asked and the insights offered by several other BPE attendees really helped me to make sense of yesterday's events. Thanks, guys!

Yesterday, Milt Shefter of the Science and Technology Council of the Motion Picture Academy of Arts and Sciences delivered an excellent lunchtime presentation that focused upon the Academy's efforts to address the digital preservation issues facing the motion picture industry and individual filmmakers. Filmmaking is becoming a digital enterprise, and filmmakers and production companies are facing a host of new challenges: file formats change so quickly that films produced as recently as five years ago may no longer be renderable, video files require vast quantities of storage space, there are no widely accepted preservation standards, and the need to migrate to newer storage media every five to ten years poses a particular risk to files that may be viewed more as products than as works of art.

Shefter asserted that the industry and filmmakers are keenly aware of the need for open, widely accepted standards and a storage medium robust and durable enough to withstand some benign neglect but lack the clout needed to push hardware and software manufacturers in this direction. Even in my stupor, I was struck by this assertion. The motion picture industry is a multi-billion dollar enterprise; surely it has more clout than the archival and library communities! However, I didn't put two and two together until someone pointed out this morning that perhaps the Academy and the cultural heritage community should consider establishing a formal partnership around storage, format, and preservation issues. This isn't exactly a new idea -- the Library of Congress's National Digital Information Infrastructure Preservation Program brought together archives, libraries, the motion picture industry, the recording industry, the video game industry, and others seeking to preserve digital content -- but it's one that merits further exploration.

Immediately after Shefter's speech ended, Sundance Institute Archives Coordinator Andrew Rabkin introduced a screening of These Amazing Shadows, a documentary that traces the development of the (U.S.) National Film Registry, a Library of Congress-led initiative to identify and preserve motion pictures of cultural, historical, or aesthetic significance. Both Rabkin and the film itself stressed that motion pictures insinuate themselves into our collective consciousness because they tell emotionally compelling stories in visually arresting ways, and during this morning's closing discussion one attendee stated that the film left her convinced that we as a community need to identify compelling stories about the importance of digital preservation and to tell them in a vivid, attention-grabbing manner.

I couldn't agree more. All too often, people (a few archivists among them) think that electronic files lack the gripping content and emotional intensity found in paper records and personal papers.  However, electronic records and personal files can be as compelling as any paper document. We're talking not only about spreadsheets and databases -- both of which can be deeply compelling to someone who has a certain type of information need -- but also about photographs of babies and the remains of the World Trade Center site, videos documenting weddings and natural disasters, audio files capturing the oral histories of relatives who have since died and musical performances of world-class symphonies, geospatial data documenting real property boundaries and the location of hazardous waste sites, e-mail messages containing professions of love and evidence of criminal activity, and a whole bunch of other immensely valuable, emotionally resonant, practically useful things. Most people know this on some level, but they don't fully realize just how fragile these files are or how devastating their loss would be.

Several documentary filmmakers are currently working on films that focus on digital preservation initiatives and the loss of important digital content, but we need more effort on this front. I vividly recall seeing the Council on Library and Information Resources' Into the Future: On the Preservation of Information in the Digital Age (1998) on PBS, and this film -- more than any of the readings I did in graduate school -- kept popping into my head as I pondered whether I really wanted to make the jump from descriptive archivist to electronic records archivist. We need gripping, story-driven films that highlight the terrible risks to which digital content is subject and the ways in which we can ensure that important content is preserved. These films must speak not only to archivists and wannabe archivists but to the general public and to elected officials and other key stakeholders. (And Into the Future, which is now available only on VHS tape, needs to be transferred onto DVD or, better yet, placed online.)

Image: Snow on the Wasatch Mountains, as seen from Interstate 15 northbound between Lehi and Sandy, Utah, 14 November 2013.
Posted by l'Archivista at 10:22 PM No comments: 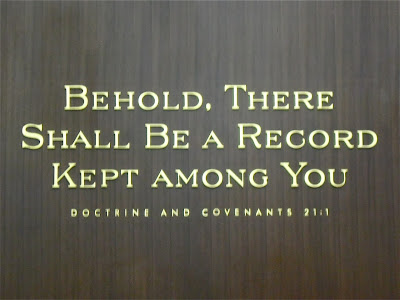 I've been up for a long time and I'm a little under the weather, so I'm going to highlight a couple of cool things that Scott Reed of Archive-It shared this morning and then call it a day:

First, Scott highlighted a tool that's new to me: computer systems engineer Vangelis Banos has developed Archive Ready, a site that enables website creators and people archiving websites to assess the extent to which a given site can be archived using Web crawling software. Simply type the URL of the site into a text box and click a button, and Archive Ready assesses:
Archive Ready also runs basic HTML/CSS validity checks, analyzes HTTP headers, highlights the presence of Flash and Quicktime objects and externally hosted image files, looks for sitemap.xml files, RSS links, and robots.txt files, and determines whether the Internet Archive has crawled the site and converted the results to WARC format.

Archive Ready has apparently engendered some controversy, but it's a handy resource for anyone seeking to capture and preserve Web content. Based upon my very limited experience with Archive Ready, which is still in beta testing, I have to say that it might not be able to locate streaming videos located deep within large websites. However, I have to say that it's overall assessments seem pretty accurate; I entered the URLs of several sites that we've crawled repeatedly, and the sites that we've been able to capture without incident consistently received high scores from Archive Ready and the sites that have given us lots of problems consistently received low scores.  If you're archiving websites, I encourage you to devote a little time to playing around with this nifty tool.

Scott also reported that the Internet Archive is looking to develop new tools to capture social media content and other types of media-heavy content that Heritrix, its Web crawler, simply can't capture properly.  To the greatest extent possible, the Internet Archive will integrate these new tools and the content they capture into its existing capture and discovery mechanisms. Capturing social media content is a real challenge (and if I weren't so tired, I would blog about the great social media archiving presentation that Rachel Trent of the North Caorlina State Archives gave this afternoon). It's good to see that new options may be on the horizon. 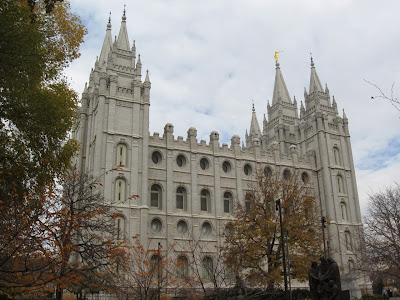 The Best Practices Exchange (BPE), which brings together archivists, librarians, attorneys, information technology professionals, and other people seeking to preserve born-digital state government information, is my favorite archival professional event. The 2013 BPE, which is being held in Salt Lake City, Utah, began this morning, and today has -- for me, at least -- centered upon advocacy and working with stakeholders.

In the interest of keeping this post to a manageable length and getting to bed at a reasonable hour, I'm going to devote this post to this morning's plenary address. I attended a great session on working with stakeholders this afternoon, but I'm too worn-out to do it justice at this time.

Plenary speaker Bob Bennett, who represented Utah in the U.S. Senate from 1993-2010, offered some great advice for archivists and records managers who work with elected officials or who seek to obtain legislative support for their programs:
Bennett also gave insightful answers to a couple of questions that frequently confront archivists and librarians seeking to preserve digital content:
Image: Side view of the Salt Lake Temple, Salt Lake City, Utah, 13 November 2013. The Salt Lake Temple, which was completed in 1893, is the largest temple ever constructed by the Church of Jesus Christ of Latter-Day Saints and is an international symbol of the Mormon faith. The building's style is rooted in Gothic and other classical forms but is unique and deeply symbolic; for example, the six spires represent the power of the church's priesthood.