Help save the Georgia Archives! 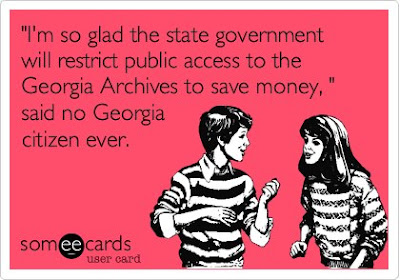 On 13 September, Georgia Secretary of State Brian Kemp announced that the Georgia Archives will be closed to the public as of 1 November 2012.  Georgia agencies have been instructed to reduce their budget expenditures by 3 percent, and Secretary Kemp has opted to take the required cut of $750,000 entirely and only from the State Archives.  Staff reductions will be announced soon.

The Georgia Archives was among the first state archives established (1918).  It has won many awards for its programs and state-of-the-art archival facility and has been a respected leader in archives, government records programs, and research use.  It's also done some important electronic records work.  However, in recent years, the Georgia Archives has repeatedly suffered budget cuts, staffing reductions, and reductions in public hours.  At present, the repository is open to the public only two days a week.  Secretary Kemp now wants to make it virtually impossible for Georgia's citizens to access their own history.

Georgians appalled by this proposal have started an online petition protesting against these cuts and are sharing information via a new Facebook group, Georgians Against Closing State Archives.  Please sign the petition and "like" the group, but keep in mind that online activism simply isn't enough.  Elected officials pay more attention to paper letters, faxes, telephone calls, and in-person visits than to e-mail messages or online petitions.  Given the seriousness of this situation, I urge you to write, call, or visit Georgia's Governor, Lieutenant Governor, and Secretary of State and urge them to reverse this devastating decision.  If you're a resident of Georgia, you should also write, call, or visit your state Representative and your state Senator.\
When you call, write, or visit the Governor, Lieutenant Governor, Secretary of State, or legislator, ask him or her to:
You should also focus on a few of the points below, putting them in your own words and using your own examples -- particularly if you are a Georgia citizen:
Here's where to direct your letters, calls, and visits:

The Web site of the Society of Georgia Archivists provides detailed contact information for individual Representatives and Senators and legislative committee heads as well as tips for communicating effectively with them.

Georgia archivists are trying to keep track of advocacy efforts relating to the Georgia Archives, so please be sure to send copies of any letters you send or summaries of any contacts you make to Kaye Lanning Minchew [kaye-at-troupcountyarchives-dot-org] of the Troup County Archives.